Perhaps indicative of my extremely one dimensional following on Twitter, (yes I’m a women’s soccer fan), every other tweet on my timeline today spoke about the USWNT pay and workplace gender disparity lawsuit.

The most interesting tweet I read, was one from @charlesboehm

Dirty little secret: A quiet but significant segment of people around MLS view NWSL (& WoSo in gen) as a competitor.

The Past Has Lined the Present: An Old Blog

A few years ago, I wrote a blog in response to an article written by a prominent Canadian soccer blogger talking about an MLS team choosing not to join WPS, the second version of the women’s pro league that folded a couple of months after that article.

This is the blog I wrote here in 2011 that created a lot of controversy and in the end had over 5000 views when all was said and done.

What sparked the 2011 blog and irked me in particular was the line in this blogger’s article:

“if one of the most committed organizations to the women’s game is rejecting the WPS model as it currently stands, well that should tell you something. As we wrote Sunday, its time for women’s soccer to get real and get down to the hard work of growing the sport from the ground up. There are no shortcuts to getting a stable and fully professional league.

(And for a dose of side-note irony? This shortcut was found 2 short years later when the governing bodies chose to join many of the top countries in women’s soccer in the world, and fund a pro league. But I digress.)

The article stated that this MLS team wasn’t interested in joining WPS, the second version of the US women’s pro league. Throughout the article he quoted the president of a MLS club as an authority which I felt was preposterous based on my experience as a player within his organization.

The cliff note version of that blog that still resonate 5 years later were:

a) In 2006, despite being treated as second-class citizens under the vibe that we were lucky to have a team, players didn’t speak up because of the concern that they would be punished with a loss of playing opportunities -this is probably the main reason in 2016 that players still don’t speak up more.

b) In 2005 and 2006, with some of the top stars on the Canadian National Team, and immense and equal coverage in the local media, our team would have had the 4th best attendance in the USL, the equivalent men’s league despite being, obviously, female. This shattered the usual argument that women can’t justify asking for anything because we actually were drawing an average of just under what the men were.

c) Because of this we asked the question as a group as to why we weren’t getting a dime of compensation (our leading scorer drove 4 hours round trip every day to training without even gas money) when we knew benchwarmers on the men’s team were getting $1500/month and housing. There was a discrepancy and we started questioning it.

d) The team took a stand and were going to do something about it. The night of our meeting the president of the club showed up for the first time, and “coincidentally” offered us a pittance of pay. The main thing he established however was that the club knew we were unhappy and about to do something. The stars of the team fresh off of seeing 3 National Team starters getting tossed in 2005 for speaking up against the CWNT coaches and a forced move to Vancouver, by boycotting a game, perhaps didn’t feel secure in taking the lead and continuing the fight. Because of this (rightful and proven) fear, everyone, including the star players (still some of the best in the world for the CWNT) backed down and we took our pittance from the club and carried on.

e) But the biggest thing I got out of my whole experience in 2005/2006 on the women’s side of this MLS club, relevant to this current situation, was Boehm’s tweet. My naivety was broken, as juxtaposed with my excitement that we were starting to really take off and garner interest, it hit me one day that the club’s actions showed that they were threatened by our success. Our success as a team was threatening their goal, resources and focus of getting their main goal of getting the men into MLS.

This club made an exclamation point with their thoughts towards women’s soccer when they shut down the women’s team a couple of years ago. This action was even more disappointing, as they effectively hold a monopoly on the girls side of soccer in the province.

This experience in 2006 was the turning point for me in realizing that there was so much holding the women’s game back from being successful and it was time to start speaking up about it.

Many take a fixed sum approach and believe that with women’s soccer rising in popularity, it will take away interest, money, fan base, sponsorship, from the fledging men’s side, especially in North America. I also believe that in some way for the insecure out there, it’s a hit to the ego to acknowledge that women’s soccer if given an equal platform, could actually quite possibly be more successful than the men’s side.

There’s a legitimate chance of this happening, as in North America already, in terms of national team attendance, the women far outdraw the men on a regular basis in both Canada and the US.

But why is this male v female mentality necessary at all? The soccer economy in my opinion isn’t a fixed sum entity. There is room for everyone and a multitude of differing fans for both and new fans to find as well with an ever improving product for both genders.

I also don’t think this fear and insecurity is solely an MLS/NWSL thing – it’s more of a general insecurity found in many different sectors of soccer than the growth and popularity of women’s soccer is going to take something away from men’s soccer – it is worth noting that there are MLS clubs such as Houston and Portland that have done a tremendous job (at least from what can be seen from the outside) providing a professional platform and resources that have grown the women’s game.

However, this overriding sentiment of “women’s soccer’s gain is going to be men’s soccer’s loss”, is worth noting as this equity narrative gains momentum.

The line that I always hear in conversations of female compensation, is that women’s soccer doesn’t draw in the finances to ask for more money.

It was proof in 2005/2006 based on the buzz and attendance around our W-League team, but I truly believe with a quality product (women’s soccer is improving all the time) and proper marketing that women’s soccer can bring in the finances. It needs the chance, one of all professional players making a sum of money that allows them to solely focus on their growth and development and elevate the level of the game (yes the $6000/year NWSL players are a talking point in this discussion).

Upping the level of the game also requires playing the game on surfaces that show that the sport garners the respect for the athletes that adds to the aura of professionalism surrounding it (no the Aloha Bowl did not fit the bill with that).

Things have hit a welcome tipping point as the long time argument/perpetuation of the notion that women should be grateful for any crumbs that are tossed our way has been shown the door with the transparency of US Soccer financials being released.

Which is the greatest significance in the lawsuit in my opinion and something lacking in FIFA and down to the organizations that lead soccer: transparency.

In this case, as Title IX has been brought into play, that transparency is as forced, as it is welcome.

Relevance of the NCAA

Taking it a step further- I did a very brief look at NCAA statistics for attendance. Although not perfect, the NCAA based on Title IX and government funding has no choice but to treat everyone equally, so in some ways a valuable comparison entity-

Top 5 for Average Attendance -Women’s Soccer in 2014 (as of September- only thing I could find):

So for all intensive purposes it is fair to say that with only 12 fans average separating men’s and women’s soccer for the top 5 teams in attendance, in a perfect cauldron of equality that the NCAA is purported (and legally mandated) to provide, revenue generation would be at least equal when both are treated the same.

NWSL: The Ramifications of Equity- A Comparison w MLS

Why has US Soccer pushed back against acknowledging women’s soccer as the success that it has been, especially over the last few years?

For one, it would cost US Soccer more in salary for players both for the National team and potentially for the NWSL-

Frances Silva (@fasilva11) from the NWSL’s, FC Kansas, did some interesting research on pay gaps between the top levels of MLS and NWSL pay relative to current federal pay equity, highlighting another massive gender disparity found in US Soccer. 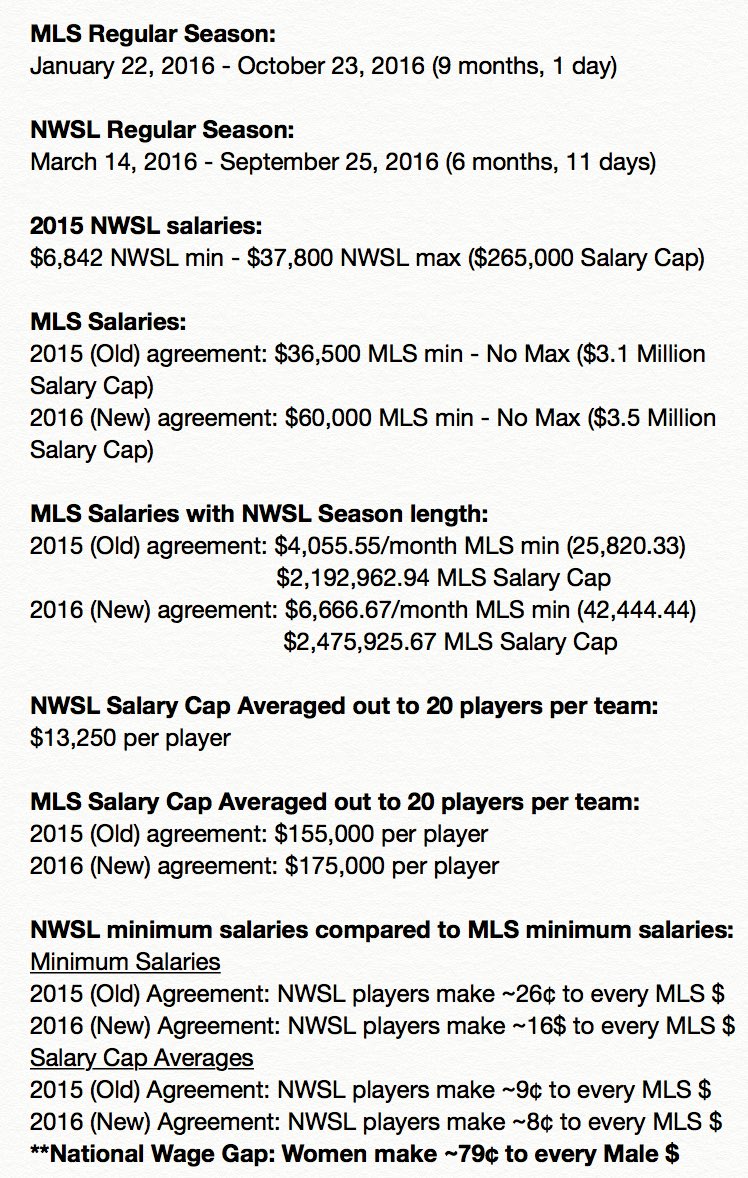 Where Gandhi Fits Into This:

What’s bothered me the most as a player within women’s soccer and what’s held progress back is a couple of things.

The first is the idea that we have to justify being worthy of playing for more than just the crumbs that are sprinkled for us. I’m not sure if its our socialization as females in our society and the desire for everyone to be liked and not rock the boat but we need to ask or we will never receive, especially when it is so obvious that it is deserved.

That’s uncomfortable, but it’s necessary and it isn’t done enough. As players we sometimes don’t recognize our own power to change the very things that everyone complains about.

The second, and I get it, is the threat of retribution on our playing careers if we speak up. Which is why I think its fantastic that players such as Hope Solo, Carli Lloyd, Alex Morgan and the likes are using their status now, a status that far supersedes the soccer world to ask these questions and better the game.

To them, I say thank you.

Because the reality of the situation, is that without players like them stepping up and stepping up together, big organizations can squash them. Through suing US Soccer, legally forcing them to open their books and be transparent, two things rarely seen in upper level soccer, accountability comes to the table. With national and international media such as the New York Times picking up the story as a front page item, back room bullying for these organizations becomes difficult and a long-time coming conversation needs to start being had.

US Soccer’s response that essentially amounts to: “we’re leading the world in the crumbs that are being given, show some gratitude!” now with the world watching, is as laughable as it is not good enough. More importantly, with the facts now on the table, this inequality isn’t even in a ballpark of acceptable.

Excited to see the conversation moving forward and thank the USWNT for starting it.

As Ghandi said: “be the change you wish to see in the world.”

For women’s soccer, this is a great start.