So I wrote a couple of blog posts this week about some amazing kids in Newfoundland that came to our TOPP Soccer Clinic in Connecticut: Blog 1, Blog 2.

The blog posts ended up going viral in the province, and with the result I was invited on CBC Radio in Newfoundland this morning, with my good friend Nicole who organized the trip and coaches the players, and 2 players that made the trip. In the picture below is Kelsea, who wrote the letter that I featured in Blog 2, and one of the two Kirby United Academy players at the CBC Radio Station, waiting to be interviewed. 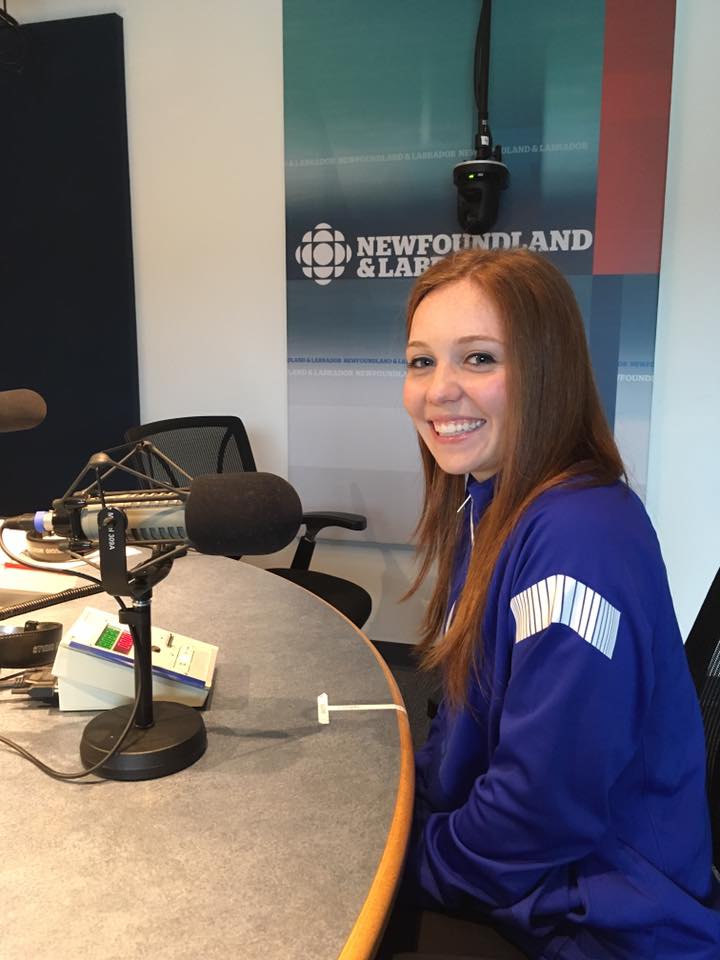 To save you the time of reading the blogs, they were basically about:

I’ve always been a big fan of the NCAA. I had an amazing experience at Yale and the University of Connecticut as a student athlete taking advantage of the resources on and off the field that spring boarded me into professional and international soccer and life opportunities. I also am passionate about the opportunities that the NCAA provides because I find it is the great equalizer in the politics that limits development opportunities for young players in Canada.

NCAA coaches don’t care where the kids come from or all the demographical connotations of playing on this team or that team. Most of their year is spent on scouring the globe for talent that will make an impact on their college team.

Simply put, NCAA coaches have to have kids that help them win, to keep their jobs. The subsequent necessity to compete and out-recruit others, is the beautiful eliminator of ego and politics that hinder player development around the world. From a pathway perspective, for kids that have aspirations of playing for Canada, the NCAA is on the resume of pretty much every athlete on the team (the amazing qualities of the CIS are for another blog, and there are many incredible opportunities and coaches in the CIS) : what is exciting is that based on raw data of the national team roster and their NCAA experience, essentially the NCAA provides a pathway to the national team, which makes it matter little if players get chosen for this team or that team in high school.

So how does Sidney Crosby not playing after high school if he was a Canadian soccer player, factor into all this you are asking?

After I tweeted my blog, a young friend of mine, Annie Ulliac, who I met via her guest playing at the Western Canada Soccer Showcase a few years ago, responded, “Imagine if Hockey Canada didn’t scout small towns or Atlantic provinces. Lol”. Funny enough Annie is another great example of how the NCAA, as a Canadian, has given her a platform as a motivated athlete to improve as a soccer player and athlete, as through this growth and platform, she is catapulting herself into new and higher level opportunities

Annie never made her Provincial Team growing up, and worked her butt off to get exposure from NCAA coaches. When I ran the Showcase, she stood out to me in the sea of young athletes, with her maturity, motivation and determination to reach her potential. She got herself to a NCAA D2 school in the US, and in her first year in D2 this past season, she won the conference rookie of the year, was named the league GK of the year, and now is starting for a team in the United Women’s Soccer league, arguably the top league in North America under the NWSL. She’s motivated, she’s enthusiastic and now she is in an environment that makes it matter little what teams she was chosen for as a teenager as she continues to climb the ranks, gaining valuable experience along the way.

Her story reminds me of one time that I met with BC Soccer when they were trying to convince me not to do my first Showcase in 2008, and said to me with the laughable line, “Let’s be honest Ciara, unless a player is on the Provincial Team, they really aren’t good enough to get a scholarship.” To which I responded, “I completely disagree with you, and that’s the whole point of why I want to do this.” As a sidenote, a player that competed in that first showcase went and made the Colombian U17 team, and played against Canada in the first U17 World Cup in 2008, through a wonderful NCAA coach at our original Showcase. The same year she played for Colombia against Canada in a 0-0 tie, five months before she was deemed not good enough for her BC Provincial Team and went on to a full ride at a NCAA school.

I don’t bring that up to make BC Soccer or Provincial bodies look bad, but to illustrate how truly subjective player selection can be. Heart, passion for the game, and the ability to persevere through adversity are difficult to measure, yet they play a massive role in the long term trajectory of players. These stories illustrate why it is so important that our system in Canada allows for multiple pathways and that we leave the ego behind that causes this player or that player to be “chosen” and be the only ones to be allowed grow, based around the rules of the system and the opportunities given.

But this isn’t about egos that hold back every system, or focusing on negatives, but bringing to light issues and solutions for them and asking important questions that will hopefully make Canadian soccer better.

So our good friend Sidney. The one this blog is centered around. I’ve been watching Crosby light up the Stanley Cup Finals with the Pittsburgh Penguins. He’s from Cole Harbour, NS. You haven’t heard of it or been there? What a coincidence, neither have I. It’s 3.5 hours from Halifax with nothing around it (thank you Google Maps for shedding some light). If Sidney was a soccer player, it would be game over before the whistle even blew to start it.

Out of interest, to my young Albertan Annie’s point that she tweeted, imagining if Hockey Canada didn’t scout Atlantic provinces or small Canadian towns, I started looking through the roster of both NHL Stanley Cup Finalists this year, the Pittsburgh Penguins and the San Jose Sharks. Of the Canadians that were listed on each roster, they came from places such as Keswick, ONT, Palmerston, ONT, Morweena, MB, Aneroid, SK, Airdrie, AB, Winkler, MB, Sorel, QC, Thunder Bay, ONT, Kelowna, BC, Estevan, SK, Cole Harbour, NS.

For comparison’s sake, I went to the most recent Canadian Women’s National Team U17 Roster that I could find, February 2016. From the top 20 players designated in Canada for U17, the team was composed of 6 from the Vancouver Whitecaps program, with every player from the greater Vancouver area, with the exception of one player from Victoria, 6 players from one club in the Toronto, Ontario area, 4 from 2 clubs in the Montreal area, 3 from 3 different clubs in the Toronto area, and 1 player from Halifax.

Unless I read the roster wrong or missed something, that means that there are six provinces out of the ten that were deemed to not have even one player that was worthy of selection and more than half the U17 team representing the country, made up from 2 teams. This begs the following questions if I was in charge of soccer in the country:

I wish everyone that is involved in Canadian soccer could have been there this weekend and experienced themselves how grateful the kids from Newfoundland were to just be given the opportunity to reach their potential as athletes.

And those crazy youth soccer parents we hear about all over North America? The four mom’s on the trip were some of the nicest, most laid back, thankful parents I have ever come across.

These kids were so pure, so thankful, in a way that I rarely see or experience anymore, and takes me back to being a 15 year old soccer junkie, whose opportunities to better myself rested solely on the hands of the adults around me. I recognized their desperation that I too felt as a teenager, just to get a chance and it stirred something inside of me.

The thought of these kids and other kids that I’ve worked with in places like Quesnel or Nanaimo, BC who are so hungry to take themselves somewhere with soccer but are hindered by politics or a lack of opportunity makes me tear up. These tears coming from  knowing so many of my best life experiences came from being able to explore and grow my potential and the only reason I was able to, was because I was given a platform and a chance.

One of the kids in the Newfoundland group in a very genuine way thanked Nicole Moores, an amazing coach who volunteered thousands of her own hours to make the trip happen, by saying, “thank you for being the first coach in our province to give a shit about us.” It could have been teenage hyperbole, but often the kids around us are the ones that extrapolate and express truth the best. The point is that this kid felt it enough to say it.

In the spirit of that honest 15 year old from Newfoundland, I think it’s time for anyone who cares about Canadian soccer, to put the politics and the egos aside and to truly give a shit about these kids playing the sport passionately in all corners of the country and start taking action to give them all some real opportunities for development and exposure.

Because for all we know, the next Christine Sinclair could be Sidney Crosby’s neighbor in Cole Harbour, hoping and praying to be noticed.